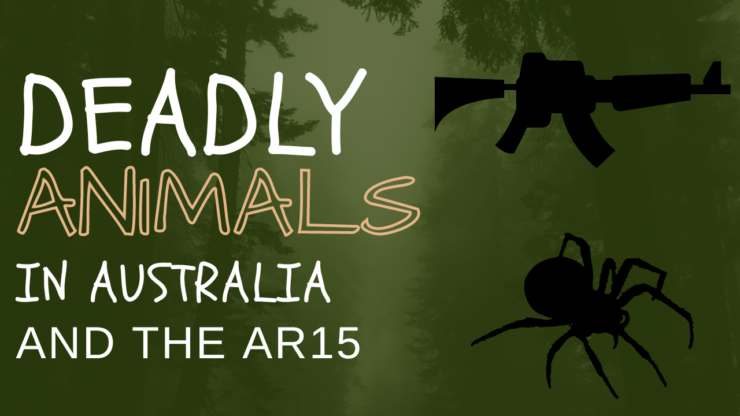 There are many dead animals in Australia and it can be a very dangerous place for the hunter.

An Aussie friend of mine sent me this Aussie song AR15 which had me laughing. It is a funny song from the Van Vuuren Bros YouTube Channel about dangerous animals in Australia and the AR15.

AR15 And Dangerous Animals in Australia

Deadly Animals in Australia And The AR15 My Statement

I am not saying AR15s are bad, personally, I think they are a fantastic weapon for a variety of reasons I am not going into here – just my opinion.

As I state in my bio and on my about Us Page I do not believe in political b.s. I am too busy hunting. So this is not an anti-AR15 or anti-NRA statement from me. It is just a funny song about deadly animals in Australia and the AR15 with a catchy tune that I wanted to share.

So if you get offended by it leave the site now. If you want a good laugh and like the Aussie sense of humor then watch the video. It is your choice.

Being a song made by Aussies it also contains some offensive language – you have been warned.

So to all my fellow AR15 lovers do not take this personally.

It is a silly song from a country that has some of the most deadly animals in the world. From brown snakes to funnel web spiders and the box jellyfish, they will all kill you very quickly and very painfully. Not to mention the saltwater crocodiles redback spiders and stonefish.

I think I have made myself clear.

Thinking about hunting in Australia? – I will put on my list to write an article about the various hunting that can be found in Australia and what deadly animals to keep your eyes open for.

I have hunted many places in Australia from chasing huge boars in the far north of Queensland they call the “Top End” to stalking the elusive Sambar deer in the Victorian high country.

By the way, it is basically impossible to buy an AR15 in Australia due to their gun laws. Again this is not a political statement or representation of my personal opinion about AR15s, differences in gun ownership laws, or any political point of view.